Handmade, hand-sewn in the original L-A

You know that special human moment when a website asks if you’re a robot? For most folks, the answer is easy. But what if the question was a little more specific? Such as: Are your shoes made by robots?

Not so simple. Unless your shoes are made in Lewiston, Maine, by Rancourt & Company. In which case you can confidently tell anyone you meet on the road of life: “Yep. These are some of the last entirely handmade and hand-sewn shoes in America.”

Given their longtime location in Lewiston, it’s no surprise that Rancourt & Company continues their time-honored, hands-on approach to making shoes. In Lewiston and next-door-neighbor, Auburn, shoemaking was creating a giant footprint long before giant footprints were a thing.

Understanding its sizable contribution to shoemaking is just the first step in appreciating Lewiston-Auburn, or L-A as it’s known. The hyphen helps distinguish from the other L.A. Also distinguishing is the area’s storied history of manufacturing textiles and bricks for Maine, the nation and the world.

You don’t need screenwriters to tell the story of this L-A. It’s a story that tells itself. A Maine original. Building things from the ground up. Using the strength of your ideas and musculoskeletal system to make top-quality products people not only want, but need. Rancourt & Company is a classic example. 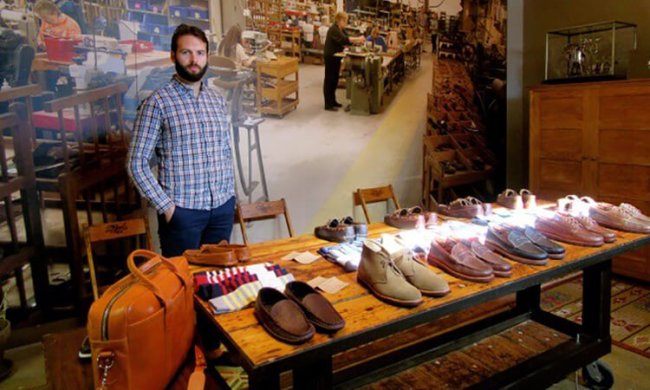 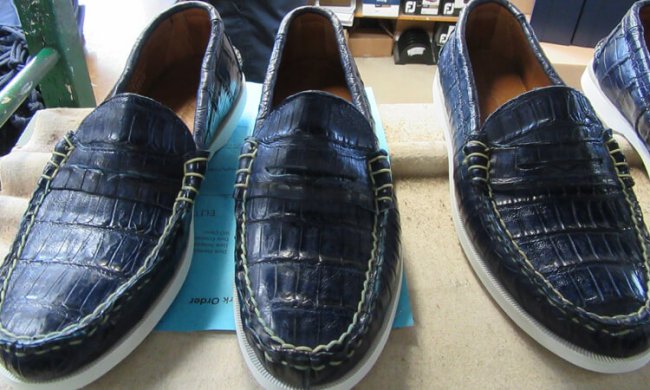 It began when family patriarch, David Rancourt, emigrated from Quebec to Maine in the 1950s. Step one was learning the trade of shoemaking. Step two was perfecting it. David Rancourt opened his own factory in 1967, making hand-sewn moccasins.

To those who owned them, Rancourt-made shoes were the greatest thing since sliced bread and bipedalism. On the heels of an ownership change in the 1990s, Michael Rancourt continued to run the company. In 2008, he and his son, Kyle, brought the company back into the family fold.

Yet through the changes in ownership and in the way shoes are manufactured – Robby the Robot we’re talking about you – the artful craft of hand-sewing at Rancourt continued. Today, in addition to their legendary moccasins, the company produces boots, dress shoes and leather sneakers. Interested in trying on a pair? You’ll find them at Rancourt & Co. Shoecrafters Retail store, and David Wood Clothiers, both in Portland. 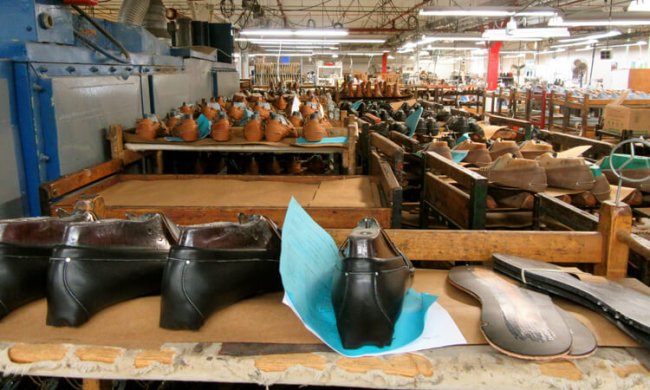 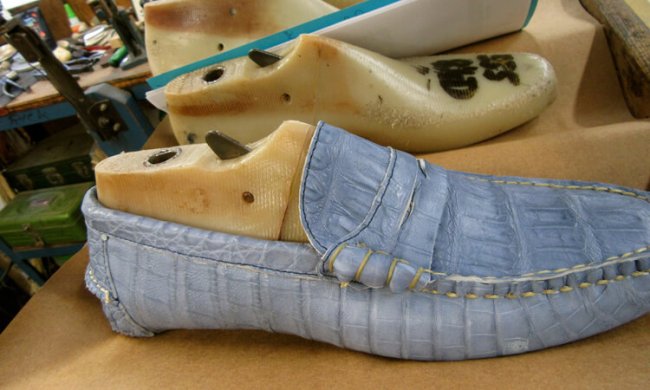 As Michael Rancourt explains in the company’s website video: “The art of hand-sewing shoes has existed in Lewiston for generations. Fathers have taught sons, mothers have taught daughters, and they continue to work for us 40 or 50 years later.”

Now that’s getting it done. The authentic way. The Maine way. And in Lewiston-Auburn these days, it’s getting done in a way that’s putting a spring in the step of the local economy.

Remember that earlier reference to bricks and textiles? Let’s circle back to the 1850s and the founding of the Bates Mill on the banks of the Androscoggin River in Lewiston. Built with those sturdy local bricks, the textile mill became the largest employer in the state by the 1860s.

What goes around comes around, especially in comfortable shoes. Less than twenty years after its closing, the historic mill is seeing major foot traffic once again. The revitalized and reimagined Bates Mill Complex is now home to new businesses, ventures and housing.

It’s just part of the surge in local enterprise that’s writing the next chapter in the L-A story. Let’s take a little walk and visit some of the players.

Making a major contribution to the atmosphere, starting at the aroma level, is Da Vinci’s Restaurant. Inside you’ll see the mill’s original brickwork and wooden beams. You’ll also find a collection of Vespa scooters and antique bicycles to take you back in time. But get back to the future for the food. The creative menu features house-made Garlic Knots, fresh soups, brick oven specialty pizzas and an array of Italian specialties. It’s casual with a focus on comfort.

Just a hop, skip and jump away is Fish Bones Grill. “Lewiston Born & Fed” is the motto here. “Good food is a vital and vibrant part of our community,” say the proprietors. We’ll drink to that. And pair it with, as they articulate it: “Comforting fare inspired by our region. Fresh fish and choice cuts. Smoked meats and poutine.” They conclude their remarks with this: “Come when you can, just as you are.” As far as footwear, just use good judgment.

Barreling right along, we arrive at Baxter Brewing Company. In 2011 Bevnet Magazine hoisted a foamy mug, naming Baxter “New Brewery of the Year.” Since then, Baxter Brewing has been one of the fastest growing breweries in the Northeast. They were the first brewery in New England to package 100% of its beer in metal containers – kegs and cans. The Pub at Baxter serves up more than 20 of their small-batch beers. Cheers! 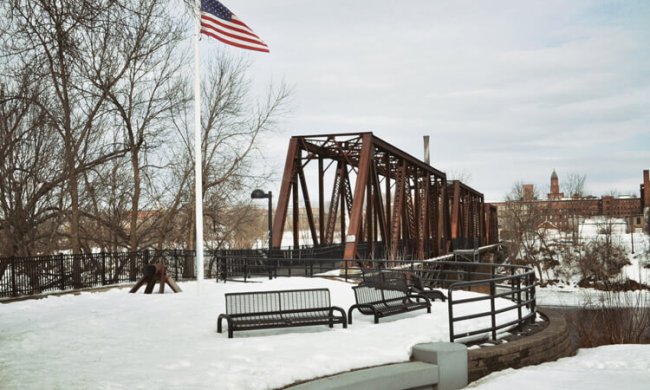 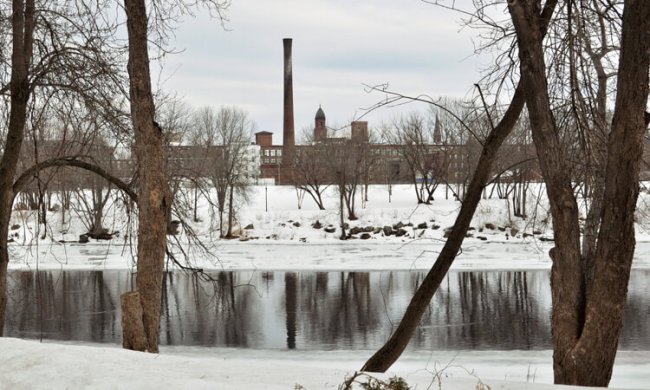 This is the place in the mill where it all comes together. Museum L-A, where the stories of workers in the textile and shoe industries come alive again, including the French Canadian emigres who helped build the industrial foundation for generations to follow. The area’s Franco-American history and cultural legacy is still very much alive today, honored and celebrated at Lewiston’s Gendron Franco Center. The mission statement at Museum L-A says it all: To foster a spirit of discovery and human ingenuity, and help people experience the rich history and heritage of work, the arts and community. Museum L-A “celebrates the history, creativity, character and cultural diversity of Maine's working people.” Going the extra mile, as Mainers do, Museum L-A also serves as “a beacon for innovators, artists, and entrepreneurs – and a catalyst for community resurgence.”

For our last stop – for today – we’ll head down the road a bit. To the Androscoggin Bank Colisee, the scene of the famous 1965 rematch between Muhammad Ali and Sonny Liston, won by “The Greatest” himself. The rest of the history and the present is every bit as great. Today, the 67,000 square foot facility is home to basketball, hockey, rodeos, ice shows, theatrical productions, trade-shows and – ring the bell once more – boxing. A sport that, fittingly, requires custom-made boots.

The Wabanaki, or People of the Dawnland, have incorporated Maine’s natural resources into their works of art for millennia. Whether as a...

Off the Beaten Path

Maine’s popular shopping spots – like Freeport and Kittery’s outlets or the Old Port in Portland – attract visitors by the millions, but...

Maine has an especially rich history of visual art that includes the work of Native American artists and artisans, 19th century masters...