You could make a strong case that the Maine landscape is a natural work of art in and of itself. But there’s no need. Because countless others have already made it abundantly clear. They’re among the multitude of visual artists, performing artists and writers whose souls have been stirred and minds inspired by the land and people of Maine.

Artists of all stripes have been drawn to Maine for nearly two centuries. Many formed lifelong connections. A special few established Maine’s original summer artist colonies.

The first was Ogunquit, meaning “beautiful place by the sea” in the Native Abenaki language. Founded by artist Charles Woodbury as the Ogunquit Summer School of Drawing and Painting, it was a magnet for American artists whose works are celebrated in the finest American and international museums today.

Ten miles off the mid-Maine coast, Monhegan Island would become a Who’s Who of great American painters, from Robert Henri and Edward Hopper to Jamie Wyeth and Elena Jahn. The inspiration burns bright today through artist residencies and the collections of the Monhegan Museum of History & Art.

On the Canadian border, in Eastport, artists have long been attracted to the Passamaquoddy Bay area, including an intrepid group of painters, sculptors, musicians and poets who ventured north from New York in the 1970s. Also on the Canadian border at Eastport – in fact, reaching across – is Tides Institute & Museum of Art. This cross-border cultural institute and museum encompasses a range of disciplines, including art, history, photography and architecture. Down the coast, southwest of Acadia National Park, Deer Isle is home to the world-renowned Haystack Mountain School of Crafts and an artist residency program founded in 1950.

Founded in different years but united in creative endeavor are Maine’s contemporary centers for artists, craftspeople and performers. Among them are Skowhegan School of Painting and Sculpture; Watershed Center for Ceramic Arts in Edgecomb, Kneisel Hall in Blue Hill, Celebration Barn in Paris, Bates Dance Festival in Lewiston, and Center for Maine Furniture Craftsmanship in Rockport. 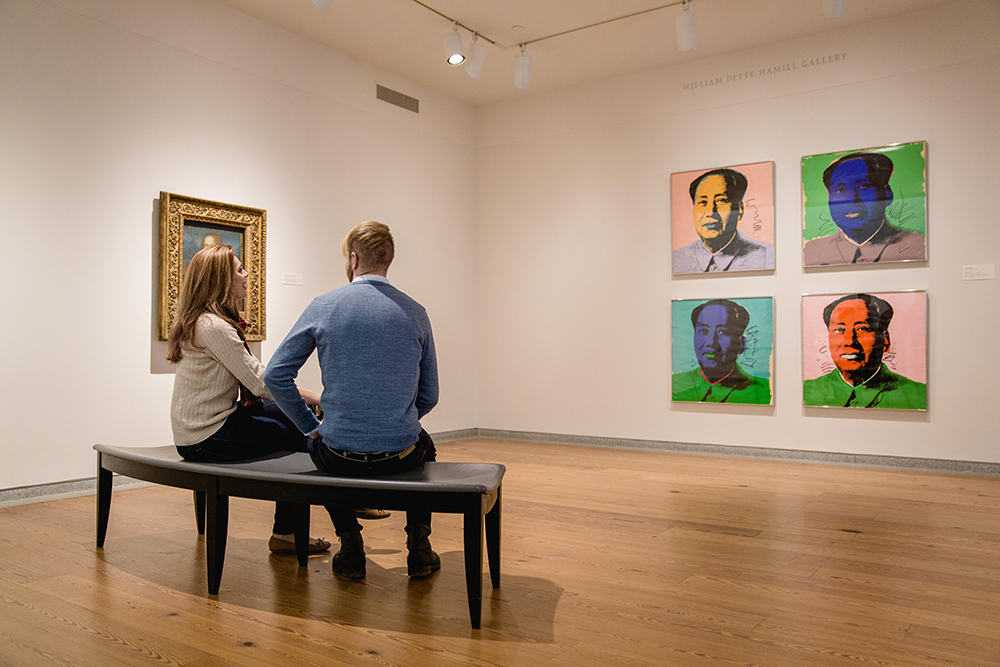 Along with Maine’s homegrown artists, the countless others who came to Maine created their own paths in finding their inspiration. Today, Maine has made it easy for you to find their work as well as diverse collections of art from around the world via the nine museums of the Maine Art Museum Trail. We offer a quick preview here, in alphabetical order.

Dedicated to the history and culture of Maine’s Native people, the Wabanaki, the Abbe Museum has two locations — one in the center of Bar Harbor and the second nearby in Acadia National Park. Bates College Museum of Art in Lewiston offers a diverse collection that includes Chinese, African and pre-Columbian art as well as the Marsden Hartley Legacy Collection. In Brunswick, Bowdoin College Museum of Art was one of the first collegiate art collections in the nation. Today, it’s home to more than 20,000 objects from prehistory to the present.

In Waterville, the five wings of Colby Museum of Art feature nearly 8,000 works of American and contemporary art, Chinese antiquities, and European paintings. The Farnsworth Art Museum in Rockland is dedicated to Maine’s historic and dynamic role in American art, with one of the nation’s largest collections of Maine’s Wyeth family and works of sculptor Louise Nevelson. Located at the historic Monhegan Light Station, the Monhegan Museum of Art & History shines with more than 1,300 works created by residents of the legendary art colony.

Visit the Center for Maine Contemporary Art in Rockland (across the street from The Farnsworth). The CMCA presents changing exhibitions of contemporary and emerging Maine artists along with educational programs and workshops. John Bisbee, David Driskell and Shoshannah White are among the artists whose works have been featured.

Great art knows no bounds. That’s especially true with the performing arts in Maine. Consider the fact that two venues, the expansive Thompson’s Point outdoor theater in Portland and the little timber-frame Stone Mountain Arts Center in Brownfield, both offer national music acts and comedy. Or, that the state has not one but two world-class orchestras — the Portland Symphony Orchestra, and the Bangor Symphony Orchestra.

In Bangor, the Penobscot Theater Company offers year-round professional theatrical performances at historic Bangor Opera House, with additional productions from their education program, The Dramatic Academy. Also year-round are the programs of Portland Stage, a professional theater company with a commitment to new works. Educating the next generation of theatrical artists through their robust internship program and Theater for Kids is also front and center.

The bottom line is that there’s no ceiling for the quality, diversity and pure joy of the performing arts in Maine.

Let’s start with a little history, beginning in Monmouth, Maine, with the opening of Cumston Hall in 1900. Today this legendary venue is the home of Theater at Monmouth, a year-round repertory company of theatrical artists from across Maine and around the country. Innovative staging of Shakespeare and other classic plays are the specialty of the house, along with educational tours and community programs.

Scene shift to Harrison, Maine, and Deertrees Theater, founded by opera director and singing coach Enrica Clay Dillon in 1936. People continue to sing its praises today for its vibrant summer theater program, and as the home of the Deertrees Theater Festival and Sebago-Long Lake Music Festival.

In Rockland, the Strand Theater is a rare example of Egyptian Revival architecture. Built in 1923, this jewel sparkles bright as ever today, presenting films, musicals and theatrical productions. If you’re in the mood for something art deco, you’ll be in design heaven at The Grand in Ellsworth. Built in 1938, the supersized marquee and shimmering steel and glass tower are as impressive as the live theater, films and music inside.

The Saco River Theater in Buxton began its existence in 1897 as a Universalist chapel. Today it’s blessed with a resident professional theater company, “The Originals,” offering everything from cutting-edge dramas to full-scale musical productions. Johnson Hall in Gardiner, Maine, had a different kind of start. Its owner and namesake, Benjamin Johnson, converted it from a livery stable into a performance hall in 1864. Today the theater presents year-round professional music and art programs but, at least for now, no horseback riding.

You won’t find people more passionate about the theater — from Shakespeare to Broadway musicals — than the professionals and volunteers who pool their talents and enthusiasm in summer theater productions in Maine. Except, of course, for the people who come to enjoy them. Here’s just a sneak peek of theaters and playhouses for your viewing and listening pleasure.

Established in 1933, the Ogunquit Playhouse produces several musicals each season. A long list of Broadway performers have graced its stage. Its children’s theater program is inspiring the next generation. Just a bit inland, in Berwick, Hackmatack Playhouse is a classic summer stock theater on a scenic, 17th-century farmstead. Performances are staged in a vintage repurposed barn and showcase professional and developing regional talent.

Based in Brunswick, Maine, the Maine State Music Theater is Maine’s premier professional music theater dedicated to education and developing new talent in live theater since the 1950’s. MSMT presents a summer program of four fully staged musicals as well as children’s musicals. In Madison, Maine, Lakewood Theater is the oldest continuously-running summer theater in the country. With a history of attracting the finest talent from Broadway, film and television, the theater continues the tradition with outstanding drama, musicals and comedy today.

The salt air of the coast. The refreshing pine of the forest. Shouts of outdoor adventurers. Laughter of kids at the beach. It’s all in the air in Maine. And, of course, there’s music. Whatever style or form they’re looking for, music lovers will find their perfect matches at music festivals throughout the state. Here are some samples to download into your getaway planning.

In Maine, all roads lead to great music, something the organizers of the All Roads Music Festival must have had in mind. This ultra-eclectic gathering in Belfast includes indie rock, folk, pop, bluegrass, indie folk, alternative country, punk, hip hop and, no doubt, a genre or two that haven’t been named yet. At County Bluegrass Festival in Fort Fairfield, there’s a good chance you’ll be making some new friends. Dubbed “New England’s Friendliest Bluegrass Festival,” the venue combines camping under the stars with bluegrass players who are stars in their own right.

Some of the top names in blues music have played their songs and bared their souls at The North Atlantic Blues Festival at the Public Landing in Rockland, Maine. Overlooking picture-perfect Rockland Harbor, the annual two-day festival features national blues performers doing what they do best. On a classical note, The Portland Chamber Music Festival features a two-week summer festival every August. The event brings together internationally renowned chamber musicians, performers, educators, composers and ensembles from around the country.

In a state famous for its art history and artistic present, you’d figure its people would craft some creative, engaging ways to honor and celebrate the traditions and continuing legacy. Here are a few of those ways.

Maine Craft Weekend is an annual statewide tour of Maine craft studios, businesses and events. Private artist studios, glass blowing studios, craft-based schools, craft breweries and pop-up shops will be open across the state for your education and enjoyment. Turning the page, the Word Blue Hill Literary Arts Festival is a three-day celebration of the literary arts, on Maine’s beautiful Blue Hill Peninsula. It features author readings, writing workshops, panel discussions and, for those so inclined, a poetry crawl.

The streets of downtown Brunswick are a lovely setting for the annual Brunswick Outdoor Arts Festival. A showcase for paintings, sculpture, photography and fine crafts, the festival feeds the creative spirit and, with specialty food vendors on-site, has something special for every kind of appetite. At The Portland Fine Craft Show, local, national and international craftspeople will showcase their fine touches in an array of media. Among them: baskets, ceramics, fiber-decorative, fiber-wearables, furniture, glass and jewelry.

Do you love a nice, relaxing stroll? Are you really into art, or even a little into it? How about delicious treats? A great cup of coffee or tea? If you answered yes to any of those questions, there’s an art walk in Maine waiting for you. Where to start? The First Friday Art Walk in Portland seems natural. On the first weekend of the month, galleries throughout downtown Portland and Old Port open their doors with an open invitation to browse, explore and purchase their works.

Take that same concept — and a comfortable pair of shoes — and enjoy art walk experiences in cities and towns throughout Maine. From Bar Harbor to Belfast, Kennebunkport to Kingfield, Peaks Island to Presque Isle, Maine has made art walks into an artform.

The history of Maine, like its rivers, lakes and neighboring ocean, runs deep. Beginning with the history and culture of Maine’s Native people, the Wabanaki. The Acadian (French and French-Canadian) and other European countries have their own unique stories to tell. Each year, these histories and traditions are honored and celebrated at heritage festivals around the state.

In Biddeford, the annual La Kermesse festival celebrates Maine’s Franco-American heritage. Music, demonstrations, a parade and fireworks are part of the festivities, along with French-Canadian food favorites like fried dough and lobster rolls.

Madawaska, Maine, is home to the annual Acadian Festival, which features a reenactment of the first Acadian landing in Maine, a traditional Acadian supper, entertainment, a festival parade, and something called “Party du Main Street.” You don’t need to know French to know that sounds like fun.

Businesses and locations related to: Arts & Culture in Maine