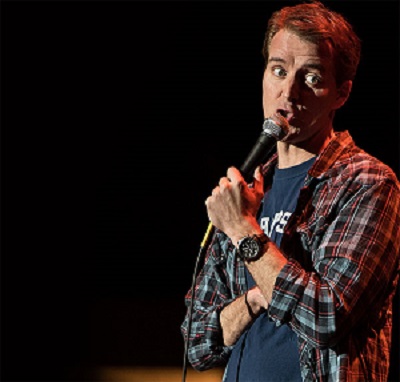 Juston has been making his national mark for two decades now with 3 ‘Tonight Show’ appearances.

Maine Deputy turned comedian Juston McKinney is not a newcomer to the spotlight. With a national career that started over 20 years ago as he was trying to hang up his badge and cutting his teeth in New York City on the weekends. That has led to an amazing career that has brought him back to his New England roots, settling back into New Market, New Hampshire with his wife and two boys while selling out theaters across New England and touring nationally. This year alone has worked directly with some comedy greats on philanthropy projects like Amy Schumer’s Blue Ocean Animal Rights Fundraiser that sold out in hours and also the SOLD OUT ‘Comics Come Home’ for the Cam Neely Foundation at TD Garden with Dennis Leary and Jimmy Fallon. In January Showtime premiered ‘Unsportsmanlike Comedy’ hosted by Rob Gronkowski featuring Juston and a couple of other national acts with 'Patriots Fever’. Juston has been making his national mark for two decades now with 3 ‘Tonight Show’ appearances, TWO COMEDY CENTRAL SPECIALS, and writing credits that include TV favorites like Kevin James & Gary Valentine. Juston’s first Amazon Prime Special premiered in August and he can be seen in Theaters and Comedy Clubs around the county including the World Famous Comedy Magic Club.