You don’t have to be a “foodie” to appreciate what’s going on in Maine these days. You just have to appreciate food. Really phenomenal food. Grown and harvested naturally, and prepared brilliantly. In most cases, within a stone’s throw from the farm field to the restaurant table. Of course, it helps to have really strong throwing arms. Which we do. We also have some of the best farm-to-table cuisine you’ll find anywhere. In fact, we originated the whole concept, from the ground up.

So what was that time like? Pretty simple, really. People ate what they grew, what they cultivated, and what they harvested with their own hands. They called it farming. And the place where this all happened, “the farm,” was basically the center of the universe. That was pretty much it. You had your farm and then you just needed one more thing. A table.

The food you grew was enjoyed at the table. At some point, the people from one farm invited the folks from another farm to come to their table and enjoy their food too. And then the other folks reciprocated. Before you knew it, they were exchanging the things they grew and trading recipes and playing board games and all manner of nice things. Including manners. And this, ladies and gentlemen, was the beginning of the “farm-to-table” movement.

As with any historical movement, this one also had its seismic moments—although the earth around Harborside, Maine, is about as stable is it gets. Oh sure, there are folks in California who feel they can stake their claim, but those in the know know that Maine, in particular the area on Cape Rosier, was truly the birthplace of America’s farm-to-table movement. 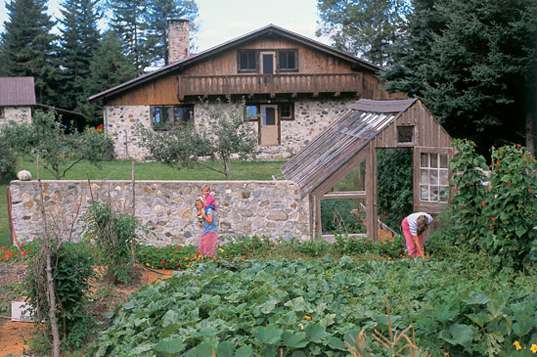 It was 1952 and Helen and Scott Nearing had just purchased 160 acres of land in Harborside to build a new homestead and pursue their vision of a simple, good life. The Nearings grew their own food, ate what they grew and even stretched the growing season by practicing four-season gardening in their greenhouse. They also did a little bit of writing. In 1954, the Nearings published their seminal book, “Living the Good Life,” in which the couple extolled the joys and rewards of a simple, self-sufficient and sustainable way of farming. Their original homestead in Harborside, made of stone with their own hands, still stands to this day and is maintained by volunteers as The Good Life Center.

The Nearings’ message resonated across the country and, perhaps most emphatically, throughout New England. The result was a migration of well-educated, forward-thinking young people to Maine in the 1960s and ’70s in pursuit of the kind of life the Nearings advocated. All these years later, Helen and Scott Nearing are considered the grandparents of the farm-to-table movement. And the people who now comprise the extended family of the movement are the land and sea farmers, restaurateurs, artisans and craftspeople of the good life as practiced and celebrated in Maine today.

In Harborside, on the 60 acres he originally purchased from the Nearings in1968, Eliot Coleman and wife and partner Barbara Damrosch continue to evoke the legacy of the good life at Four Season Farm. Described as “an experimental market garden,” the farm produces vegetables year-round and has become a nationally recognized model of small-scale sustainable agriculture.

Eliot and Barbara are both renowned writers who draw from their wide-ranging experience in farming and horticulture. Eliot, having worked side-by-side with the Nearings, has 40 years of experience in all aspects of organic farming, while Barbara has worked professionally in the horticulture field since 1977. Barbara Damrosch writes a weekly column for The Washington Post called “A Cook’s Garden” and is the author of two books, “The Garden Primer” and “Theme Gardens.” Eliot Coleman is the author of “The New Organic Grower,” “Four Season Harvest” and “The Winter Harvest Handbook.”

More than 60 years ago, Helen and Scott Nearing had already seen enough of how the world of farming and food was shifting to a more complex, commercialized model. Their vision was to maintain simplicity of life but to be creative and resourceful in making that simple way of living work. Helen Nearing explained it this way: “The business of procuring the necessities of life has been shifted from the wood lot, the garden, the kitchen and the family to the factory and the large-scale enterprise. In our case, we moved our center back to the land.”

Things have been moving that way ever since. Nowhere is that combination of simplicity and creativity more visible and ready to be enjoyed than in the farm-to-table movement in Maine today.

“The business of procuring the necessities of life has been shifted from the wood lot, the garden, the kitchen and the family to the factory and the large-scale enterprise. In our case, we moved our center back to the land.”

Remember the popular movie about time travel where the vehicle for all that moving and shaking was a DeLorean? Well, here in Maine, with the farm-to-table restaurant movement, you can still have your DeLorean, but there’s no need to go back in time. Because all the things that were great about farm-to-table from the past are here in the present. And why would you even think about skipping to the future when some of the best sustainable food on the planet is being artfully prepared and served right here, right now? And for those who happen to be future-oriented, remember one thing: Tomorrow is only a day a---.

Okay, now we’re mixing movies and musicals. Back to the food.

The farm-to-table movement does indeed have deep roots in Maine. Much of what has always been done is still being done today. There are, of course, a few things that have changed. The way some farm-to-table enthusiasts dress, for instance. At some point, sunhats gave way to Ray-Bans. And bib overalls gave it up for skinny jeans. You might see examples of both at Café Miranda in Rockland. You’ll also see an excellent example of how the farm-to-table movement is alive and well and getting rave reviews in Maine today.

Owner—chef Kerry Altiero opened Café Miranda after he and his family members renovated the historic Owl Benevolent and Fraternal Club in downtown Rockland. The owl may have flown, but the benevolence toward his diners is smilingly present in Chef Altiero’s multi-cultural cuisine, with a nod and hand gesture to his own Italian heritage. You’ll also find some evenings spiced and accented with South American, Thai or Mexican. Yet even with such international destinations on the menu, the bulk of Café Miranda’s food comes from a source so close by you could practically fly a paper airplane there. Why? Headacre Farm, just down the road, is owned, operated and raided for vegetables on a daily basis by the restaurant’s owner-chef himself, with the help of some special hired hands. But that’s how this farm-to-table thing works around here.

As Chef Altiero describes it: “In many, many places in Maine—whether it’s Bar Harbor, Belfast, Damariscotta, Portland, wherever it happens to be—the food you’re getting did not travel 3,000 miles. It traveled a couple of miles. In our case, it’s eight-tenths of a mile.”

Off the top of his head, after removing the hat, Chef Altiero named the vegetables that were growing at that moment at Headacre. Eggplants, peppers, fennel, potatoes, four kinds of onion, squash and a host of winter vegetables—for starters. It would be only a matter of time until these fresh delights would be delighting his diners. In most cases, you could literally count the minutes. But that’s the way things have always been. Farm-to-table. Garden-to-table. Living the good life, one meal at a time.

“You know anyone who has a garden today,” explains Chef Altiero, “their mother grew things, and their grandmother too. So it was like everybody saying, ‘Of course I grow.’ Zucchini, rhubarb, the strawberries in the spring. There’s honesty and integrity and there’s passion and there’s heart in it.” 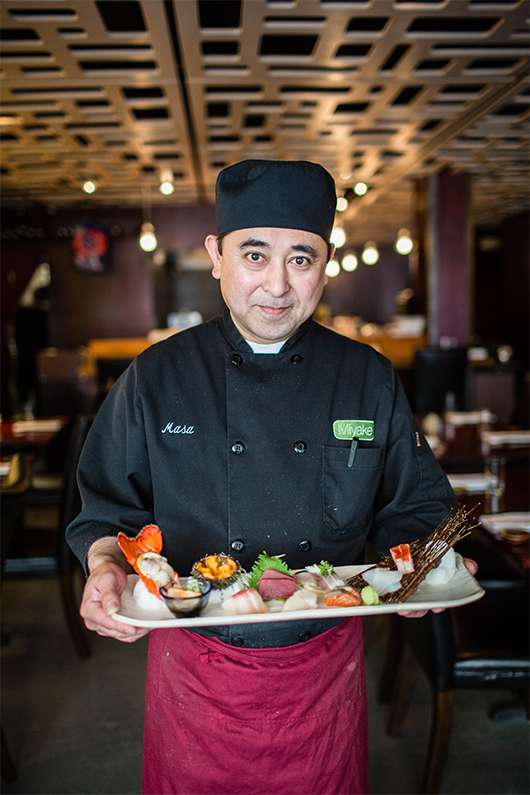 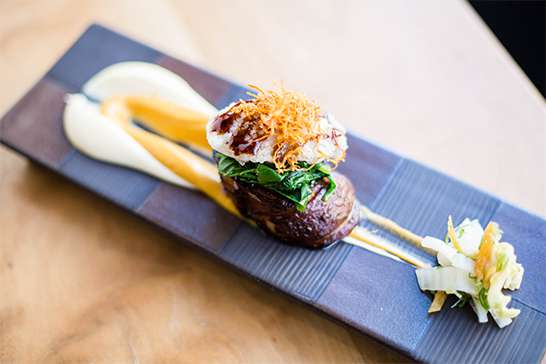 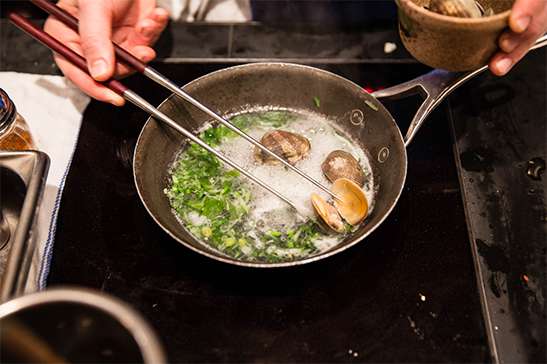 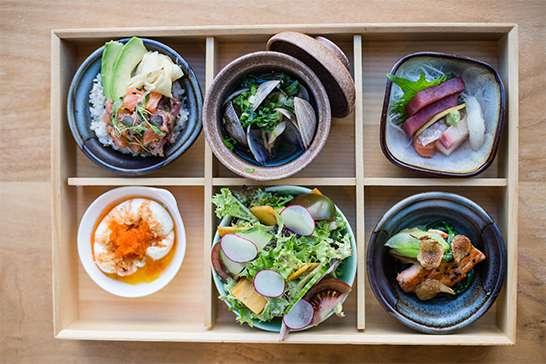 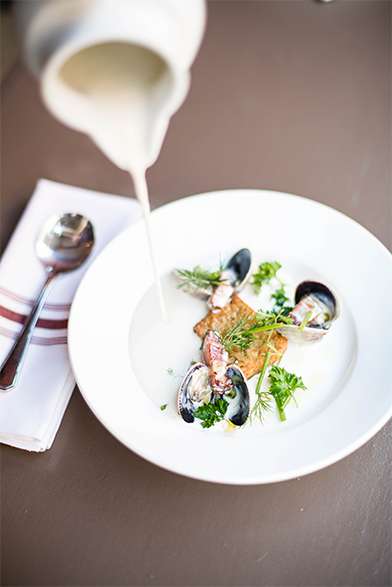 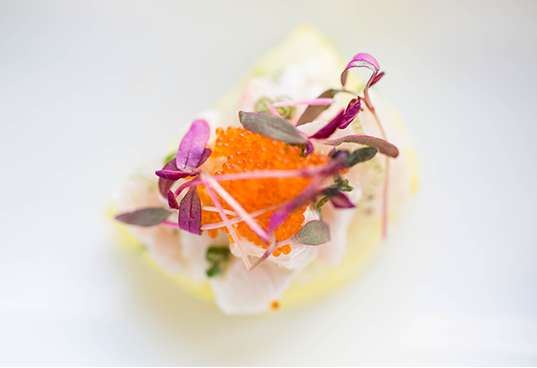 The last time we checked, there was still an infinitude of stars in the sky over Maine. And down here on the ground, in the restaurant world, there are stars aplenty too. Each brings its own unique style and creativity to the table. And each is locally sourced, celebrated and savored.

Miyake, Portland—Chef Masa Miyake opened his restaurant in July of 2011, with a mission to bring exceptional Japanese cuisine to the area. The zip code may be Portland, Maine, but Chef Miyake utilizes styles and techniques from around the world. His eclectic creations include diverse and delectable influences from Japanese, French and Italian cooking. And his menu features locally raised meat, fish and produce.

The Fiddlehead Restaurant, Bangor—Her mother was Malaysian, her father American, and she grew up with them in Tokyo. No surprise that Chef Mel Chaiken’s cuisine is a truly international experience. Colby College brought her to Maine. And Maine is delighted that she stayed. Using locally grown produce and meats, Chef Chaiken brings a special touch to comfort-style offerings, with cuisine reflecting tastes that range, as she says, from the Far East to Down East. 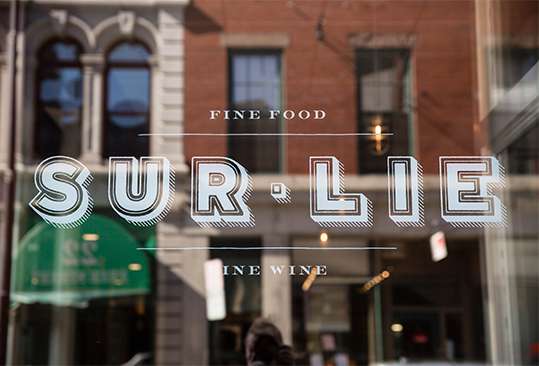 Sur Lie, Portland—The environment is charming, the cuisine features self-sustaining ingredients from the state of Maine … and the concept is sharing. Could Sur Lie be any greater embodiment of farm-to-table? Chef Emil Rivera is the culinary master behind this tapas-style restaurant in downtown Portland. And owners Krista Cole and Antonio Alviar invite everyone, but especially you, to enjoy selections from a creative menu that includes categories like “Settle and Nibble,” “Crisp,” “Pleasant” and “Bold.”

The Lost Kitchen, Freedom—“It makes me uncomfortable when people call me a chef,” says Erin French. “I’m like, nope. I’m just a girl who cooks.” Well, Chef Erin—make that Cook Erin—cooks well enough to list James Beard himself among her admirers. The Lost Kitchen is situated in what was once a pre-Civil War gristmill. Today, local farmers arrive daily with the produce, meats and other fixings for Erin’s creative dishes. And for fresh flowers for the tables, she picks those from her neighbor’s greenhouse—with a nice thank-you note, of course.

Aragosta, Stonington—The word aragosta is Italian for lobster. And that’s a delizioso place to start on Chef Devin Finigan’s menu. Atop the Aragosta menu, there’s a heading that spells things out in very clear English: “Farm to table dining overlooking the beautiful Stonington Harbor.” The Stonington lobster ravioli is Chef Finigan’s signature dish. One taste and you’re likely to ask for an autograph. Devin has most likely gotten a few of those herself from the world-renowned chefs and food writers she brings to Stonington for culinary workshops and special dinners.

76 Pleasant Street, Norway—76 Pleasant Street restaurant gives you the GPS location right in its name. And it’s the same vicinity for almost everything that finds its way onto the menu of Bret and Amy Baker’s 24-seat restaurant. Everything is created and cooked in-house and sourced from local growers and purveyors. Lamb shank is from a neighbor’s farm. Seafood from Portland, fresh from the ocean. And the herbs for the dishes are grown right there on the premises. Located in the historic Judge William Jones House, Bret and Amy invite you to come and make a little history of your own.

Exceptional farm-to-table cuisine that’s enough to make you salivate just reading the menu. National, international and, most importantly, local recognition. More awards than you can shake a spatula at. But you know who the biggest winner is of all? You. So come and get a taste of Maine. And enjoy exquisite dining that will comfort your soul, connect you with new friends and prove, once more, Einstein’s theory that all time is relative. Especially when it’s time for a farm-to-table experience, Maine style.