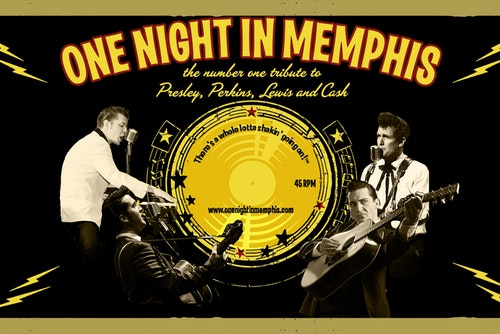 One Night in Memphis

One Night in Memphis® created and directed by John Mueller is the number one booked and critically acclaimed tribute bands.

Over 90 minutes of authentic rockabilly, country, gospel and 1950’s rock and roll. The San Francisco Examiner raves, "An Amazing Show!" The show has an ever growing list of sold out performances, outstanding reviews and a great social media presence and fan base.

Be a witness to and experience rock and roll royalty with the music and talent that has stood the test of time. True American music featuring acclaimed national talent guaranteed to get you rocking and rolling. There's a whole lotta shakin' going on!

Businesses and locations related to: One Night in Memphis